Talk about the amazing Alice In Chains here.

I have been sent a photograph of a board from the studio sessions for the recording for the Self-Titled record, "Tripod" or "the Dog Record" if you like -- a modicum are seen in The Nona Tapes, but this is the only time that I have descried the board in its entirety
--
Detailing the names of songs and their recorded instrumentation, the listed songs appear to reveal several that went unreleased. 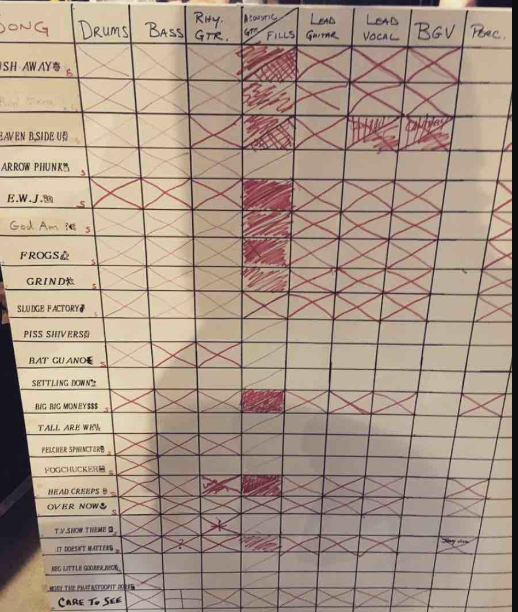 --
It follows, of course, that many items on the list were included on the final release for Alice in Chains in 1995 -- the song titled "Big, Big Money" must correspond to "So Close", as Sean Kinney proclaims the titular phrase in said song.
The items never seen on the 1995 record are, "Arrow Phunk", "E.W.J", "Piss Shivers", "Bat Guanoe", "Settling Down", "Tall are We", "Pelcer Sphincter", "Fogchucker", "T.V. Show Theme", "It Doesn't Matter", "Reg Little (?) Reg" *sic, naturally*, "Moby the Phatastoopid (?)" and lastly "Care to See".
--
The majority of these names have a certain asinine and sardonic flavour to them, so it would surprise me not much if they were mere larks.
Several familiar songs are notably absent -- namely "Again", "Shame in You" and "Nothin' Song" -- the possibility that some of the entries may conceal these otherwise unaccounted for songs, therefore, naturally arises, although the text within the blank space is suggestive of once having read "Nothin' Song"
The most glaring item is "Settling Down", which indeed became a song on Jerry Cantrell's 1998 solo effort Boggy Depot -- and as such, I feel that to find out whether some of these items were transfigured into tracks for Cantrell's solo released, or for the William DuVall-era of Alice in Chains, if ever we do, will be most interesting.
It's hard to start things over, You can feel the fire around us, All the time. It's still unfashionable to beleive in principles.
Top

You could msg the Aic FB page? Or is that Yuku board still open?

I have sent requests for information to the Alice FB page in the past, namely relating to some interviews that I was unable to find, but as I recall I didn’t get results out of it. I could give it another shot with these song titles, I suppose.
—
I can’t comment on the Yuku boards.
It's hard to start things over, You can feel the fire around us, All the time. It's still unfashionable to beleive in principles.
Top

TBH I cant even find the Yuku board,

According to a "Mickey Holmes", the song I misread as "Arrow Phunks" is in fact "Farrow Phunks" which is about a Simone Farrow, a pornographic film actress who Layne Staley apparently dated at one point. The song apparently was renamed “Shame in You” as such accounting for at least that absence.
It's hard to start things over, You can feel the fire around us, All the time. It's still unfashionable to beleive in principles.
Top
Post Reply
5 posts • Page 1 of 1

Return to “Alice In Chains”